Its the first day of autumn on African Bliss Farm 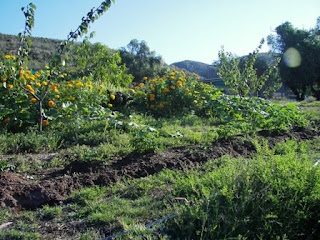 We started off our day by flattening our mielie field stalks, so that they can decompose through winter and add organic material to the soil. All cobs that had not properly developed, we collected and put them in the drying shack, so that they can be used as a supplement feed for our horses, which is not such a bad thing in these times of drought. We then cleared a bed of basil and spent tomatoe plants. We managed to save some tomatoes and with the basil, Rae bottled some pesto for the winter months ahead, as well as some for now. Because we don't have pine nuts, we us almonds from our almond trees. When you live in a rural area, you have to improvise! In fact, we make hummus that started off pretty close to the original recipe but has now morphed into a hummus that has the Conterio signature all over it and tastes absolutely delicious. The rest of the basil got tied into bunches and hung in the drying shack, we also intend to collect the seeds off the flowers to plant again next season.
In the middle of all this activity, my neighbour phones to let me know that he spotted a lone baboon moving in the direction of my beehives, which are situated behind my house. So I bang down the phone and  rush out to confront him, only to find that his superior senses must have heard, smelt or even seen me, long before I saw him and he was ambling off in direction of a clump of prickly pears with what only can be described, as the coolest and most arrogant swagger in the animal kingdom. He then sat down in the midst of them, plucked off a ripe jucy  fruit and proceeded to eat it, while casting me a contemplative "whats up" look. It was only when Rae, my wife appeared, that he decided it was time to leave the property. Its weird because she does not look at all scary, but maybe in the baboon world she does, what with the curly hair and dark sunglasses!
By now it was lunch time. We ate homemade wholewheat bread, with wheat that had being ground by myself, bread baked by myself, homemade hummus, homemade basil pesto and tomatoes from the garden, all made into a wholesome sandwiches. We then retired for an afternoon siesta. Aaaaaa..... the life I tell you. 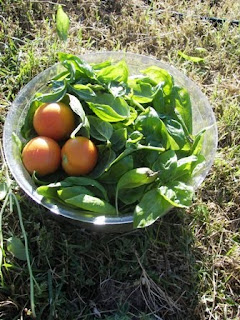 When we awoke, Rae decided that seen as we had so many almonds, she was going to make biscotti to go with some coffe later on. All went well and the biscotti was sitting in the oven for drying and I was outside busy with the horses, when I heard Rae scream. This is not uncommon, as she does regularly scream for one or other reason and usually its just one shriek followed by a, "Dinoooo, please come and get this spider out". But on this occasion, as I waited for the "Dinoooooo", all I heard was a bang, clash sound followed by another shriek. I then knew this was serious and was met by a panic-stricken Rae shouting,  "Cape Cobra!", after which I flew into a flat spin and because she had screamed the way she did, all the dogs went pouring into the house. So I instructed Rae to get the dogs out and I went and fetched my snake catcher which is always close at hand for such emergencies and believe you me, there are many but this is the first time we have had a snake in the house. To cut a long story short, while kicking an 17 year old cat out the way repeatedly because she was so fixated on lending me a hand, the snake was caught. It was the most angry Cape Cobra I have ever had to deal with. I later learnt, while we where eating our biscotti and drinking coffee on our stoep and reflecting on the nerve racking experience, that Rae had bent down to pick up her dust pan behind the kitchen door and discovered the cobra was curled up underneath it, he got such a fright that he reared up at her and she shrieked and dropped the dust pan on him. No wonder it had been so angry, I mean who would not be!
Posted by African Bliss at 4:24 AM

Poor snake! I'm glad you got it out of the way without anyone getting hurt!