Back to school for some 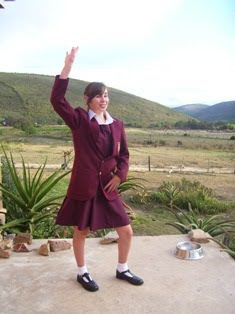 Something that I have omitted to blog about, when it all happened, is the decision of both my daughters to go back to school. I have three daughter’s, my eldest had already finished school by completing her last year at home on the Cambridge system. The other two both did 3 years of home schooling which consisted of starting with a year of Clonard, a South African system, followed by 2 years of borrowing school text books that were relevant to each of their grades. The reason for the last 2 years of their home schooling being so relaxed and basically done at their own pace, was that we couldn’t find a curriculim that was both affordable and satisfactory to us. When you search the internet, you find all kinds of home schooling systems beckoning you with fancy websites and impressive curriculims,.but when you investigating a little deeper, you find out that they are not what they promise, or sometimes it just takes going as far as trying to contact them and you get no joy, well, enough said!
So, for the 2 years of home schooling, our daughters did all sorts of things which included, spending copious amounts of time riding their horses, being taught art in return for horse riding lessons, taking off into the mountains on some adventures of note, learning to do basic book keeping, baking and selling their successes at the local market, learning to play guitar and sing, planting and growing vegetables, attending and taking part in a local musical concert, etc and also keeping to their own schedule of actual school work.
Suddenly, as 2010 drew closer both Alex 17 and Rain 13 both decided that should the opportunity arise, they would like to go back to school. In some ways I was absolutely mortified, because the whole reason for them doing home school is that I always felt that the public school system seemed to be a bit of a farce, like leading the lambs to the slaughter, churning out little robots with no imagination and no ambition to follow their hearts but rather what society and the mass media pump into them. Making them fear being different and not conforming to the masses, but that’s just me!
So… with Gods grace and our love, it all fell into place.


It was Alex that decided that should she be able to go straight into Gr.12, she would go for it. She had left public school in Gr.7 and thereafter had written no exams except tests that we had set for her. This we felt was a tall order but to cut another long story short, we managed to get her into Gr.11 at Camps Bay High School in Cape Town, where she is flourishing and doing very well. She lives with my wife’s sister’s family, who very generously offered to open their home to her. Her cousins are also at Camps Bay High with her. The reason for her going to Cape town to finish her schooling is because only option then, locally, is an Afrikaans high school. This obviously meant that her whole curriculim would be in Afrikaans.
No sooner had we set this in motion, we then got approached by our local Domini to tell us that because of the insurgence of English speaking people into the area, the local high school had decided to accommodate English speakers by supplying them with English text books and the teachers would also make the effort of explaining when asked, in English. This all tied in with our next door neighbours moving back to their family farm after ten years and offering to take Rain into school every day. So it was a done deal and Rain went off to school!
I can’t help thinking how this whole school thing came together, for both our daughters, with very little effort on our parts, just as if it was all just meant to be. So I put my faith in God and decided to go with the flow…


Incidently, putting your faith in God does not always mean things will go smoothly, in other words, according to the way you think it should go. If you remember to look for God in every avenue of your life, be it in the good and the bad, the light and the dark and the night and the day, you will be sure to find Him. 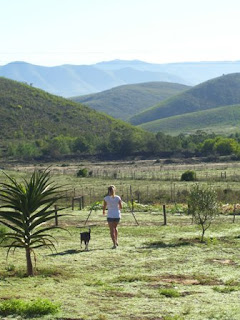 So after the first term of school for Alex in Cape Town, she was back for school holidays with her friend Georgia Brisco. They managed to get a lift home with a local lad who is studying at varsity in Cape Town. At the end of their 6 hour drive home, I met them in the middle of the night, at the beginning of our dusty farm road. It was a crazy experience, being pitch dark and not been able to see each other outside of our vehicles, or in my bakkie, as I have no inside light. Having not seen each other for about three months, I was curious and dying to see her in the flesh, holding her close and listening to her happy and excited voice! This might seem all quite dramatic, but we are a very close and loving family. So it would be another 7 km before we could see each other in the warmth of our farm house kitchen, with the rest of the family. Once we were all together, news was swopped, supper was eaten as a family (almost… our eldest daughter is living and working in Cape Town too) and life was great. 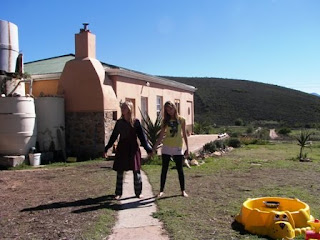 I am happy to say that both my daughters reports were exceptional and after a term of school, they were both loving it. The family had a brilliant school holiday together, along with Georgia, who felt like family within the first couple of days. Then the holidays were over and everything returned to the new, normal way of our lives with the kids at school, back to telephonic communication, facebook, emails, homework and our foster child, but he is another post that I might, or might not write about….
Posted by African Bliss at 11:54 AM

Labels: african bliss back to school

Reading your latest post within 2 minutes of receiveing an e-mail from a friend who now lives in Florida, USA - and both had to do with God's love. If you don't mnind, I have copied the text from that e-mail below:

The man whispered, "God, speak to me" and a meadowlark sang.

But, the man did not hear.

So the man yelled, "God, speak to me" and the thunder rolled across the sky.

But, the man did not listen.

The man looked around and said, "God let me see you." And a star shined brightly.

But the man did not see.

And, the man shouted, "God show me a miracle." And, a life was born.

But, the man did not notice.

So, the man cried out in despair, "Touch me God, and let me know you are here."
Whereupon, God reached down and touched the man. But, the man brushed the butterfly away and walked on.

I found this to be a great reminder that God is always around us in the little and simple things that we take for granted ... even in our electronic age..
So I would like to add one more:
The man cried, "God, I need your help!" And an e-mail arrived reaching out with good news and encouragement.

But, the man deleted it and continued crying .

Don't miss out on a blessing because it isn't packaged the way that you expect.

My instructions were to send this to people that I wanted God to bless and I picked you. Won't you please pass this to people you want to be blessed.

I know how you must have felt when your daughters decided they wanted to go to school, but loving God is allowing His will to direct us - I have been guilty of trying to bend His will to my requirements - and who am I??

From the sounds of it your daughters were raised in a very loving home and thus have that advantage over many other children. The strength that they will have absorbed will carry them through to when they are raising their own family.

Their joy and happiness in returning home every holiday will be there for all to see - especially you. A visible sign of their love and gratitude for the grounding that you have given them.

And the fact that they had the confidence to return to school after such a long time out of that regime and restriction speaks mountains about the strength of character you have instilled in them.

Well done. You should feel very proud of yourself.

Thank you so much for the message, a truly beautiful one at that and full of encouragement.