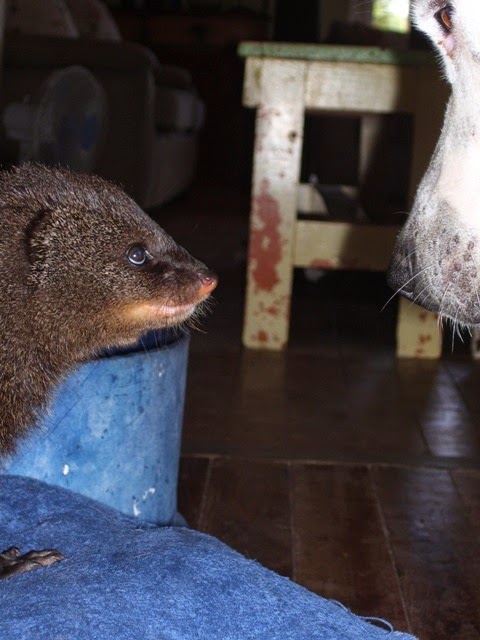 Before I even start this post, I have to say that in the 6 weeks of having "Honey The Water Mongoose", life definitely did not follow the usual routine but instead got adapted to Honeys routine. This was not a difficult readjustment for us, as every minute of it was entertaining, extremely interesting and the love affair between mongoose and humans grew in leaps and bounds. Our initial plan was to keep her and let her adapt to being part of the farm household, hopefully able to come and go as she pleased, until the day she would attract a mate and off into the sunset they would go. 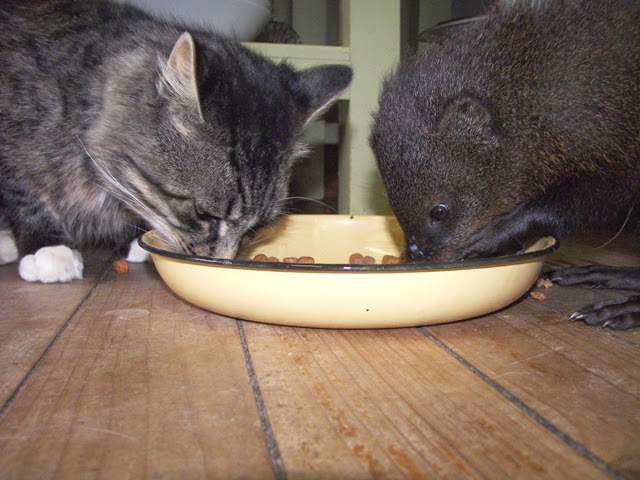 Unfortunately, it soon became apparent that while 7 of our 9 dogs accepted her, two of them didn't and never would. To them she was a potential meal and she would never be safe. We soon realised that we would have to come up with another plan... but more about that later!
Her most active part of the day was early morning and I mean early (just before sunrise), till about 10.30am which is when she would put  herself to bed (on her teddy under our bed). She would just suddenly stop whatever it it was that she was doing and trundle off to bed. When she wanted to sleep, she wanted to sleep and you could not change her mind! Honey would then wake up at about 2pm and then busy herself in her little "pond" (Rae's large roasting dish filled with water) which we put in our bedroom for her. We scattered little stones and other objects on the bottom of the dish and she would spend ages paddling about, meticulously taking each object out of the water with her delicate, long fingered little hands.


If she heard you busy with something in another part of the house, she'd rush to come and find you, leaping with joy when she spotted you, as now she'd found someone to play with her!  Her playing would involve a rough and tumble sort of play fighting with your hand, or small pink teddy which we'd pretend was attacking her and would receive a voracious attack back from her. She had a formidable set of teeth and would sometimes forget herself in the heat of the game and bite just a bit too hard. She soon realised to release at the sound of a panicked yell of "ow"!
Her all time favourite game though would most definitely have been when she sat on your lap and we'd hold our legs tightly pressed together and she would stick her little arm through, fishing for your fingers which we'd move up and down under our legs. and  would reach down between your thighs pressed together and fish for your fingers or anything else that you held there with one little hand and the other  supporting herself with her cheek pressed up against your thigh. She would do this with such a determined effort with her little cheek pressed up against your thigh.  This game supported Honey's intense curiosity for constant investigation, be it under rocks, in cracks, in the sand, or under the duvet! She was constantly on the hunt for the unknown, obviously it being something that she might be able to eat. 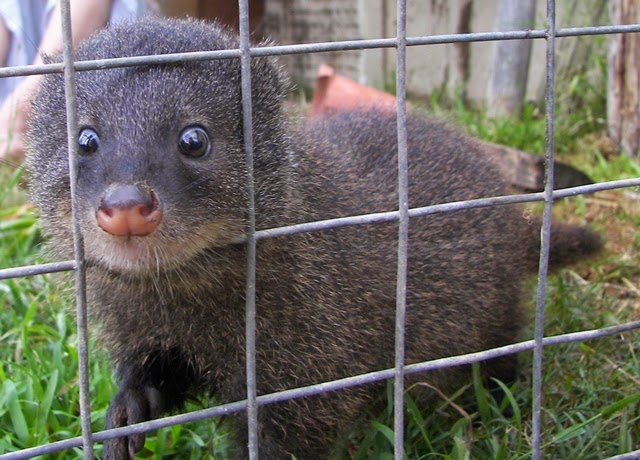 When she was hungry, she would hang on Rae's leg, uttering little cries. She would then climb on Rae's lap and be fed with a syringe of watered down milk and raw egg. She slowly progress to raw chicken and her favorite, live insects! I would spend ages hunting around the veggie garden, catching her grasshoppers, etc. I would throw them down in front of her and she would leap on them with savage delight and gobble them up! Another favorite hunting pastime of hers was for me to throw the live insects into one of her "pools" where she'd dive on them in the water and fish them out. 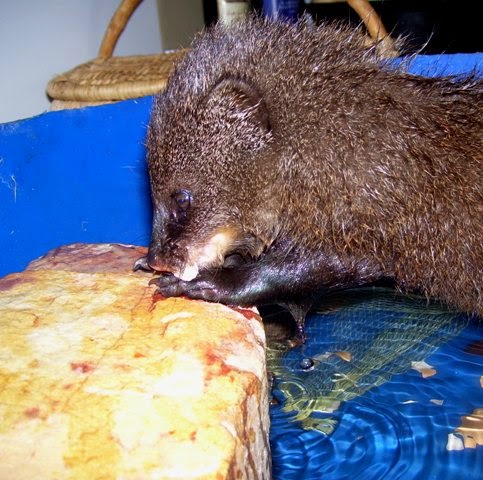 When we first found Honey, we thought that she was a Cape Gray Mongoose but after a visitor to the farm said that she did not really look like one. We decided to consult "google" and this, combined with the fact that she was constantly climbing into the dogs waterbowls, made us realise that we had a baby water mongoose. She also looked exactly like the images of a Water Mongoose on "google"!
We decided to accommodate her needs by putting plastic barrel bottoms, cut down to about 5 inches in depth around the house and a big barrel cut in half lengthways in her play pen outside, all filled with water and some large stones for her to grope under.
The first time we introduced her to her pools, we threw little stones and beans in to see how she would occupy herself with them. This was fascinating because again, her natural instincts came into play. For the first few days she would toss them all out the water, much to our delight because then we would toss them back in and she would do it all over again. Suddenly, a few days later, she started picking up the little stones and standing on her hind legs, she would smash them down with great force between her legs. This was Honey's way of practicing how to smash crabs and mussels, etc,  food that play a major part of a water mongooses diet. We also discovered that this is what she would do with eggs and watched with great delight as she smashed her first egg all over the kitchen floor and then licked it up! Our dogs where horrified at this spectacle, staring at her and us and then each other, as if to say,
"Can you believe this naughty behavior, if it were us we'd be in such trouble but here the humans are laughing and clapping and giving her encouragement to do it all over again... sometimes life is just not fair!" 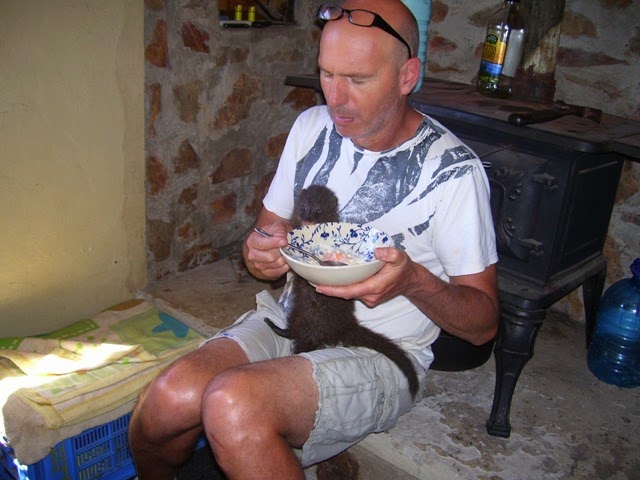 When we saw how much of  Honeys natural instincts were in place,  for development into her adult years and to help her cope in the wild, we started to realize that to keep her would be wrong and unfair.
We also realized that the longer we kept her, the more humanised she would become and the more difficult it would be for her to return back to nature and be a capable and happy water mongoose... and for us it would be near impossible to let her go... obviously!

So we set about doing research on various rehabilitation centers and although there are a few not too far from us, it became glaringly obvious that many of them were about making money first, through tourism and not about the welfare, or the rehabilitation of the animals. Eventually we decided to speak to the local vet (60 km away) as we had heard that him and his family had also raised a water mongoose for a few months and then eventually had gave her up to a rehabilitation centre called Tenikwa in The Crags, outside Plettenberg Bay (www.tenikwa.com/)
So with very heavy hearts, we decided that this would be the best thing for her future and we made the necessary arrangements. We had 2 days to say our goodbyes to her that was filled with tears and feelings that we were abandoning her, all the while, knowing that we were doing the right thing. Rae got to take her out to Tenikwa in The Crags, on a beautiful sunny day where apparently on arrival, they were met with staff and the owners, who were just lovely and supportive and made us feel so much better about our decision. It is a beautiful place where so much good work is being done the rehabilitation of wild animals. They kept us updated on her development with photo's, etc, and we believe she was finally released back into the wild after a few months, into an area that they knew was populated by other water mongooses.

Spring is coming and this is the time she will hopefully find a mate and have lots of cute little baby "Honey's".
We will always cherish our time with our little "Honey" and often go through our millions of photo's of her and just feel so blessed that we had this incredible experience with her!

To read more about interesting info on water mongooses go to this link: http://www.sanbi.org/creature/water-mongoose

Posted by African Bliss at 3:21 AM