horsing around in the kouga 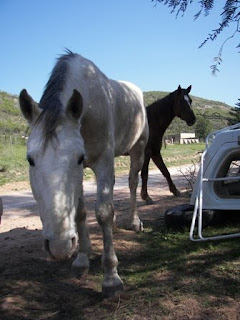 One day while changing my tyre I had ghwo ghwo, my daughter's horse, come to check out what I was doing, apparently on recomendation from my mare, Lush, in the background. She's always worried about my DIY work and also likes to make sure that what ever I'm doing has nothing to do with food. She has a HUUuuuge appetite and wouldn't like to miss out on a snack! 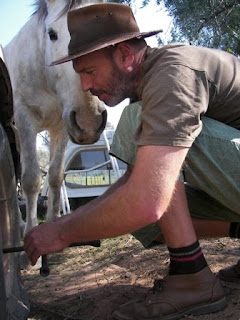 I then had to explain to him exactly what I was doing, but he still felt that he should butt his nosy nose in and tell me exactly what to do step for step even though he was repeating what I had just told him! I think he was just trying to keep his clever status in front of Lush, obviously trying to impress her. 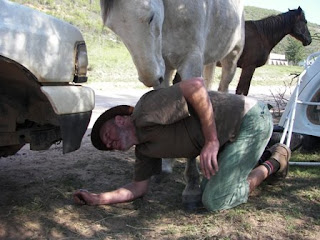 He then told me that, as I had the wheel off, I may as well check to see if anything else needed attention under the bakkie. What a nerve coming from a horse! I had to admit though, that he did have a point.
He then whispered into my ear that, once I was finished could I please, if I dont mind, thank him loud and audibly so, Lush could hear. I then understood for sure that all his hanging around and commenting was definately to impress young Lush. 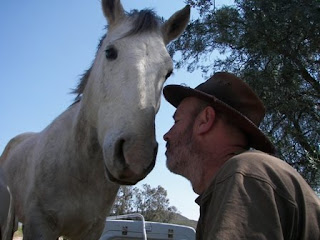 Once I had thanked him as he had asked, he looked at me and said, "thanx bro" and walked off with Lush into the veld.
I must say it was nice to have Gwho Gwho's company while changing the tyre, as well as helping the guy out to impress his girl.
Posted by African Bliss at 10:59 AM

I think we are going to have to come and visit you when we travel to George in December...just so that my Jess can kiss your beautiful horses...she is a horse whisperer of note!