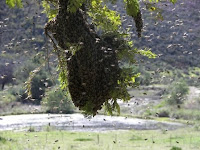 It all started yesterday when I decided that I would plant out my strawberry plants, accompanied by the buzz of my usual lady friends, when Rae came rushing out to tell me that a swarm was gathering on a branch in the Jacaranda tree next to our house. Well, later for the strawberries I thought, as I ran closer to see if I could possibly get to them and without to much effort, get them into a box. As I was considering all the options, the branch snapped under their weight and they landed on the ground. Great! Time to switch to plan 'Bee', considering that I had not quite hatched plan 'A', in my excitement of gaining another swarm of bees. 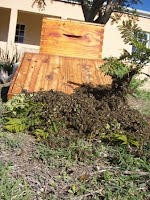 Plan "Bee" hatched quickly and I went and got an empty hive with some wax sheets in. By this time, the swarm had started to re-swarm again, in the branches of the tree above. My only hope was that the queen was still in the bunch on the ground and thus could be lured into the hivebox or broodbox as it is correctly called. In the picture, you can see the part of the swarm still on the ground and it looks as if they are starting to migrate up the ramp into the hive. 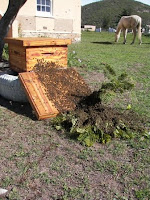 Well here they are definitely on their way. I hope the qeen is happy and they will stay. 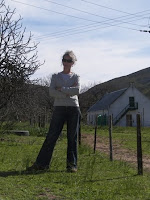 Here is the main queen and she is the one that we all have to keep happy! Rae is just making sure that all goes well. 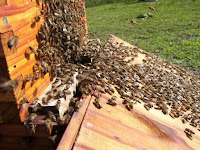 Yup, there was definite rush for the entrance, as the girls were all amped to resume their various duties. The swarm that was regrouping in the branches above, was by now getting noticably smaller as they too were now entering the hive. It is actually quite amazing how they seem to keep a bunch of girls in the air, flying around constantly, so that one is never quite sure of how many bees, are in fact, going into the hive. I suppose also to deter any potential predator's attention from the main body of the swarm as they are also (I imagine), in their most vulnerable state at this stage. 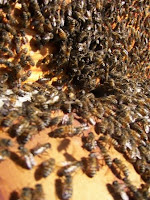 Here it almost looks as if they are been sucked into the entrance, in their rush to get in.
Well the girls were in and when I went to go and check on them this morning, they had cleaned out the interiorof the hive, this was evident by the bits of debri they had thrown out and it looked as if their path of flight was heading straight for the flowering heather on the hillside ahead. For a similar story on my bee adventures, check out "Shared Earth Magazine" issue 2. Well... back to planting strawberry plants, yummy.

Posted by African Bliss at 9:53 AM

Hi there, we are looking into starting a hive in our little garden...hope we are not looking for trouble!