Evening of Entertainment - by Rain (13) 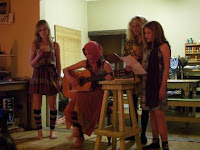 The June-July holidays were great!! I arrived back from a friend of mine who lives in PE and was happy to hear that our long time family friends were coming to stay for a couple of days. We had not seen them in a long time, so everyone had changed and grown up, but in another sense it seemed just the other day we were visiting them at their house in Cape Town, which had actually been 2yrs ago.

On the day they were to arrive, we waited in anticipation for their white kombi to come driving down the road to our little 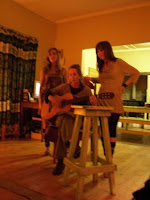 farm house. When they arrived, we went out to meet them and help them carry their bits and pieces inside, after a fluster of hugs and greetings. It was that night, in the middle of a delicious supper, that the idea for a show came about, everyone was to participate, including the adults! Everyone thought it was a great idea and immediately began plotting what they were going to do…

The next to two days was just practice, practice… When the night finally came, we first ate supper and then wrote down everyone’s names on a piece of paper and put them in a hat, for as usual, no one wanted to go first. First act was me and my sister doing a dance, which was followed by skits, poems, dances and the much anticipated act that the fathers were to do. No one had ever seen them practicing so it was a mystery as to what they were going to do…. And guess what they sang , “Doe ray me” 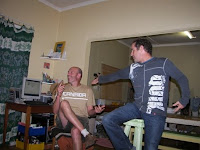 it had everyone in laughter! When the show was finally over everyone was tired and beds were calling. IT WAS a GOOD night!!!
Posted by African Bliss at 9:53 AM