I had to go Uniondale to have an x-ray taken of an odd blue hued lump under an old scar from a heart op I had two years ago. Uniondale is about 70km from where we live. My bakkie ( truck ) finally gave up the ghost, so our only form of transport in and out of the farm, is a Honda 200cc Bushlander, which copes with the dirt road exceedingly well but is a bit slow when it comes to tar, as the bike's top comfortable speed is about 90/80 km per hour.
Luckily for me, I have friends that stay the little hamlet of Harlem, 58km from where we live, and as they were going to do their weekly shop in Uniondale, they gave me a lift there. The trip to Uniondale was great as we chatted and caught up on news while traveling through the famous Uniondale Pass which is really stunningly beautiful, if you love the Klein Karoo landscape.
After arriving in Uniondale, they dropped me off at the hospital and we arranged to meet 2 hours later giving us all more than enough time to complete our separate missions. We said goodbye and we parted ways looking forward to our reunion in 2 hours time, followed by lunch back at their farm.

Two hours later, miraculously,  I walked out. I say miraculously, because, as you know, anything to do with governmental hospitals,  usually takes forever and a day. As I walked out of the hospital,  my friends arrived,  looking quite happy to see me walking out the door on time. They informed me that Rae (my gorgeous better half) had sent them an SMS (I never carry a cell phone) that I should contact her immediately and that the moment I was finished at the hospital, I should come home. I obviously thought, "what the f#@^k", because for me to get home, would take at least an hour and a half. What could be so urgent? My friends suggested that I give Rae a call and find out if there was some kind of emergency, which I duly did. My daughter answered and said that "Mom" wanted me to come home because there was a huge Cobra in the garden and she was terribly worried about our dogs.
"O my sack!", I exclaimed and informed her to remind Mom that by the time I got home, it would be gone and in fact, it had probably already disappeared. She agreed with me and said that mom was just in a panic. I could quite understand this because I am always been around to take care of snake incidents. I always catch and release them again, somewhere far away.

When I got home, I got the details of the story! Rae had organized for the next door farm labourer's wife, Silvia, to come and help her clean the house. Silvia was busy in our bedroom cleaning the windows, when she saw a Cobra slithering towards the house and Cossie (the cat in the pic above) ambling along the lawn in a direct trajectory to cross paths with the Cobra. The Cobra was, apparently, equal in length to my daughters height (157cm). Silvia saw the snake and let out an almighty scream that had everyone running to see what was going on, only to find her pointing out of the window. Looking out the window, they were just in time to see Cossie coming face to face with the cobra! The Cobra reared up and hissed at Cossie and Cossie followed suite by standing on her back legs with front paws poised in classic kung-fu pose and hissed. The Cobra, deciding this black cat was not one to cross paths with, then lowered itself and slithered away in a wide arc off into the Fig tree...... wow, I wish I had witnessed this! After hearing this story, we all went to check the Fig tree, there was no Cobra to be seen!.

This happened a few months ago and we have never seen the Cobra again! Yay to Cossie!

Below is a pic of the garden bounty on the same day: Basil, peppers, tomatoes, carrots and butternut. I guess it was just another day on the farm! 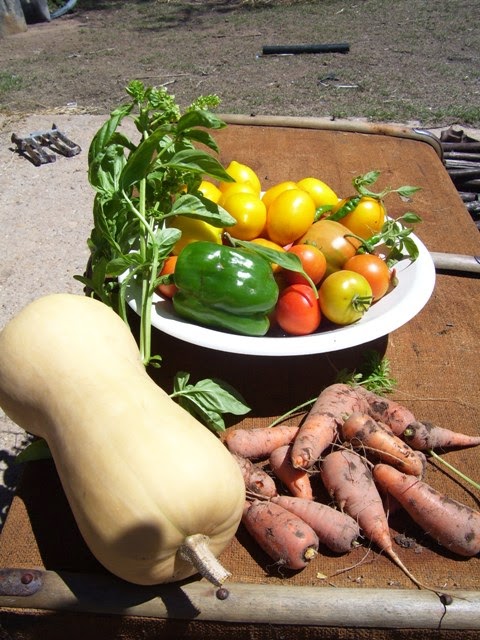 Posted by African Bliss at 4:12 AM