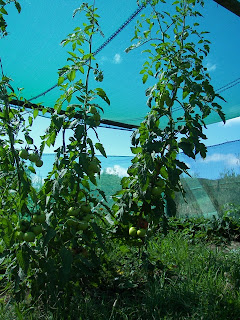 This year I have had the most success with growing tomatoes. This I attribute to the copious amounts of water I give them, comfrey compost tea and spraying them every 5 days with a 10% milk/water solution. When it comes to watering tomatoes, it"s no use watering them willy nilly everyday, or every other day with a little bit of water! Make a good basin around the plant, or if its a bed with 3 to 6 plants in it, then turn that into a large dam  and put a hose in there on a slow trickle and let it water for half an hour. The kind of trickle I mean, is one that would fill a bucket in say, 5 min. 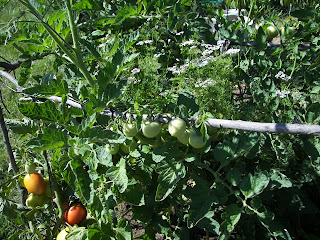 If you have the means to grow your tomatoes under shade cloth, then do it and tie a string around the base of the plant to the top of the shade house and train your plant up this. I use a 40% shade cloth, as this lets through enough light and provides enough warmth for them to florish. I read somewhere that tomatoes don't need as much the direct sunlight, as they need warmth, to produce and from my above experiment (see above pics), this seems to be true. For hardiness, I planted Roma tomatoes, as they also seem to be the best for canning, jams etc. 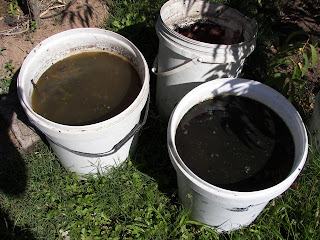 Above, you see my buckets of comfrey liquid compost. To make this, you take the comfrey leaves and pack them in the bottom of a bucket up to a third of the way up, place a brick on top of the leaves to weigh them down, then fill it up with water to the top. This you leave for two weeks. It is said that you should dilute this mixture by 10% with water before use, but I diluted it by a 5%  and used it once a week. It has the most organic smell you have ever smelt!!! In fact, when a person first approaches the area after the 2 week brewing time is over, it's hard not to believe that someone has not taken a dump (to put it mildly!!) in the area, because boy... it smells potent but luckily it soon disappears after application. So put lids on the buckets to contain the odour and don't let your hands get wet by the mixture! 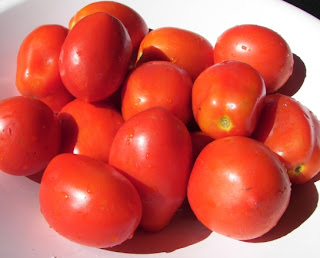 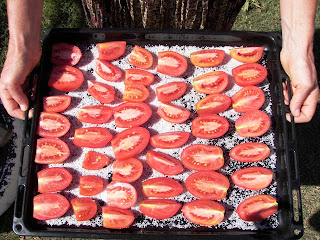 Cut them in half and lay them on a bed of salt (coarse salt ) and put them in the sun for about four days. Just remember to bring them in at night and put them back out in the morning. 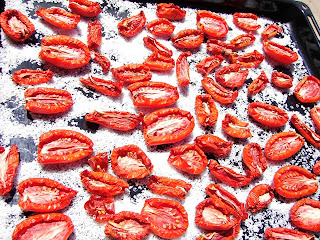 The above picture is after two days, two trays like this made two jars and less... if you are tempted to sample as the days proceed. We found various ways of storing them on the internet, with lots of different opinions as to which would last longer. In the end we settled for:
1. Packing them into a jar with some basil, filling it up with olive oil and store in a cool dark place.
2. Putting them into a zip lock bag and closing, leaving a little opening to suck as much air out as possible  thereby creating a vacuum effect, closing it and popping it into the freezer.

I had a rogue (probably from my compost heap) tomato plant pop up in my shadecloth veggie patch this last summer, and the tomatoes I got from it were stunning! Definitely going to grow my tomatoes in there in future.

Never thought of tying a string from the top - brilliant :-)

As for drying - I halve and pop them on a tray in the solar oven, leave it slightly ajar, and in a day they are done.

Very nice toms! I cut mine up today but with all our rain this week, I am not sure it will be dry enough. will put them in the hot car tomorrow if it's sunny.

thats so cool that you managed to have tomatoes till now. I got all blase with mine so they got sick. If there is not enough sun, you can always put them in your oven on low. I cant wait for spring to plant a whole stack, and then make loads of sun dried tomatoes.

I was just reading your blog on the tomatoes... what does the milk/water mixture do? And did you plant the roma tomatoes from seeds or plants?